Is Aubrey TOAST yet? 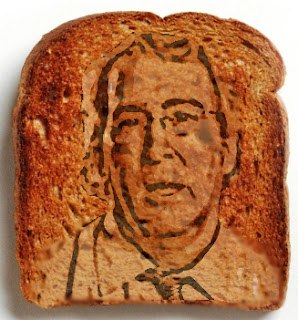 (Reuters) - As Chesapeake Energy Corp.'s board of directors moves to distance itself from loans taken by CEO Aubrey McClendon, documents reviewed by Reuters show that at least one former board member had undisclosed personal financial ties to him in the past.

Now-retired board member Frederick Whittemore lent money to McClendon in the late 1990s, the documents show, even as Whittemore helped determine how much the CEO should be paid to run Chesapeake.

Excerpt:
Ron Hutcheson, McClendon's personal spokesman, acknowledged the existence of the loan but said the deal between Whittemore and McClendon ended in March 1999. He did not say whether the debt was repaid.

To repeat: He did not say whether the debt was repaid.

Naturally, I had to check out Frederick Whittemore.  I found that he is a Trustee for the Center for Stategic and International Studies  (CSIS)

His Bio from CSIS: Frederick B. Whittemore - CSIS Trustee
Frederick B. Whittemore, advisory director at Morgan Stanley, has held positions at Morgan Stanley & Co., Inc., for over 30 years, becoming a partner in 1967, managing director in 1970, and advisory director in 1989. He is past chairman of the National Syndicate Committee, past governor and vice chairman of the American Stock Exchange, and past international president of the Pacific Basin Economic Council. He has also served as president of the Bond Club of New York and as a director of the Chesapeake Energy Corporation (Oklahoma). He is a member of the Council on Foreign Relations and a lifetime trustee of the Aspen Institute. He serves as a director on the following noncorporate boards: American Associates of the Royal Academy Trust, Dartmouth College’s Tuck School of Business Administration (Board of Overseers), and the Eugene O’Neill Theater Center (Board of Trustees). Mr. Whittemore received an A.B. from Dartmouth College (1953) and an M.B.A. degree from the Amos Tuck School of Business Administration (1954).

A retired Morgan Stanley honcho listed among the state's top tax deadbeats is hoping for a big payday with two lawsuits.

Frederick Whittemore, who spent three decades at the investment bank, is seeking millions in actions filed Tuesday against the Oscar-winning songwriter of "You Light Up My Life" and an investment firm.

His suit against Endurance Capital says a $17 million investment in the company "declined drastically" as a result of "waste, mismanagement and fraudulent conduct."

Whittemore is No. 47 on the state's current list of deadbeats, for owing $1.3 million in back taxes.

In a statement to the Web site Gawker, the former Morgan Stanley partner claimed he has paid his taxes.

This presents a few questions:
Did Aubrey pay back his loan?

If not, will Whittemore sue him?

If Whittemore has investments in Chesapeake, will he sue Chesapeake for "waste, mismanagement and fraudulent conduct."?

And finally Is Aubrey Toast yet?